Stand Aside in Order to Stand Behind Your Consumers 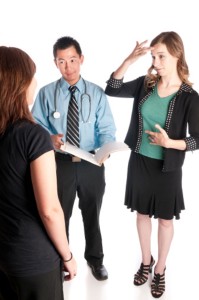 Last month, a local Fox News station reported a story about Marty O’Connor, a man living with quadriplegia after an accident, who earned his MBA from Chapman University. The headline, however, was “Mom of quadriplegic grad student surprised with honorary degree.” The story focused on the man’s mother, who attended every class with her son to take his notes because he could not. The university awarded the woman an honorary degree for her service to Marty, and the story I read focused on her achievement, while ignoring her son’s.

This story rubbed me the wrong way for a few reasons. The man has the right under the American with Disabilities Act to a paid note-taker of his choosing. He should not have had to be accompanied by his mother to attend classes and have access to note-taking. I can only imagine the impediments Marty faced to making friends or asking for dates while attending class with his mother. Was he less willing to participate in class, afraid of asking a simplistic question or giving a wrong response in front of his mother? Was she even a skilled note-taker, and was she willing to adapt her style to suit her son/consumer, or did she think she knew best?   None of these questions is answered, because not one of them was asked — or at least not reported on in the published story.How often are Deaf consumers ignored while hearing teachers, doctors or co-workers speak directly to the interpreter? Hearing people who have made no effort to get to know their Deaf colleagues or classmates are never shy to ask the interpreter how to say something in ASL, or inquire whether we have Deaf people in our families or how we got involved in the interpreting profession. Of course, I often defer to the Deaf consumer to answer questions about ASL and the Deaf community, but I have to wonder why do these people ask me in the first place, instead of the Deaf person whom they’ve known for months or years?

Chapman University took this focus on the service provider to an extreme by granting Marty’s mother an honorary degree for being her son’s note-taker. She did not pay tuition, nor did she take any tests or write any papers. She had not accomplished extraordinary achievement in the field of business, as most all honorary MBA degree recipients have. She was a service provider for a person who had the legal right to the service, and she worked for free, allowing the university to avoid the cost. For this, she was rewarded with a degree others work for years to earn.

Years ago, the Deaf actress Marlee Matlin appeared on The Tonight Show, and the host, I believe it was still Johnny Carson at the time, asked questions of Matlin’s interpreter, Jack Jason. This was long before I was an interpreter—I had only begun learning ASL—but I remember wondering why Carson was directing questions to the interpreter when Matlin was his guest. While it’s understandable that the language barrier can seem daunting to hearing people who don’t sign, interpreters are present to bridge the gap, not widen the chasm. Let’s not allow hearing people’s focus on us to be one more obstacle to Deaf people’s full participation in their gatherings, or in forming direct relationships with others.

Interpreters, note-takers and other service providers do important work. In the best-case scenario, they allow Deaf people and people with disabilities to better connect with their teachers, co-workers, health care providers. In the worst cases, they block those connections, stealing the attention and forming relationships of their own, rather than acting as a conduit for their consumers. In short, we can stand between our Deaf and hearing consumers so each must look around us to see the other, or we can stand behind our Deaf consumers as they face the wider world.