Posted on January 5 2016 by Amber Ceffalio 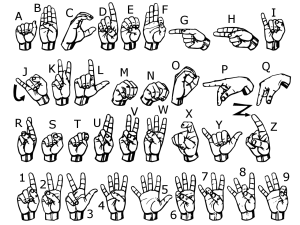 Upon first encountering people communicating in sign language, many hearing people may exclaim enthusiastically, “Oh, ASL is such a beautiful language!” Basically, asking “Can I join?”  Interpreters may roll their eyes – after all, speaking in ASL is our profession.

But welcoming potential signers will go a long way in opening up communication between Deaf people and the rest of the hearing population. This is a good thing.

So, the next time an eager, potential signer tells you ASL is beautiful, invite them in. A warm response–It is a beautiful language! Learn it!–will go a long way in creating an abundance of recreational signers.