The Imposter Interpreter: How Should the Profession Respond? 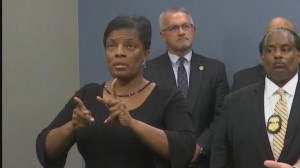 I recently found myself pulled into an argument on Facebook, responding to a friend’s post about Derlyn Roberts, the woman appearing to interpret a news conference by law enforcement in Florida.

The argument revolved around the question of whether this woman was a fake interpreter, as stated in many headlines reporting the story, or merely a bad interpreter, unqualified for the job and in over her head. While some insisted that she was a fake interpreter with a criminal record for stealing funds designated for children with disabilities, I maintained that it seemed implausible that she could benefit—financially or otherwise—from posing as an interpreter, for which she would not be paid. Some suggested her goal was to gain clout and recognition for interpreting at such a public and important event, but I maintained that she would inevitably be outed as incompetent, so how could her taking a role she could not proficiently fulfill would be to her advantage?

Some comments stated that it did not matter whether she was a fake interpreter or a bad interpreter, because the result was the same: she denied communication access to Deaf viewers and her actions were wrong, and possibly criminal.

While I certainly agree that the result is the same, whether she was a fake interpreter or a bad interpreter does in fact matter, because the causes of the infraction are different, as are the remedies.

Fake interpreters indicate a security problem. Case in point: Thamsanqa Jamtjie, the man who claimed to be an interpreter at Nelson Mandela‘s funeral in South Africa. He should never have been allowed on the stage with world leaders. Not only were Deaf attendees denied full access to the program, the safety of many heads of state was compromised. The solution here is more extensive background checks and checkpoints for those who wish to gain entry to the event.

I believe a greater threat to communication access and the integrity of our profession is the bad interpreter. In states without licensure, anyone can print up business cards stating that he is an interpreter, and agencies with lax hiring procedures and no skilled screeners on staff will hire these people, sending them into the community to do untold damage. Bad interpreters do not consider if they have the requisite skills or knowledge base for a given assignment. They do not have a commitment to the Deaf or interpreting communities, and they rely on the fact that many agencies and hiring institutions cannot evaluate their skills (or the lack there of). Agencies that do not solicit feedback from their consumers, and workplaces that do not ask their Deaf employees for their interpreter preferences, create opportunities for bad interpreters to continue working.

Simply requiring certification is not a solution. Pre-certified interpreters are qualified to work in some settings—it’s necessary to their preparation for certification that they work for real-world assignments, albeit with the supports and preparation necessary for them to succeed. In addition, certified interpreters are not qualified for every job, and it’s the duty of each individual professional, and those who hire us, to gauge one’s competence for any individual assignment.